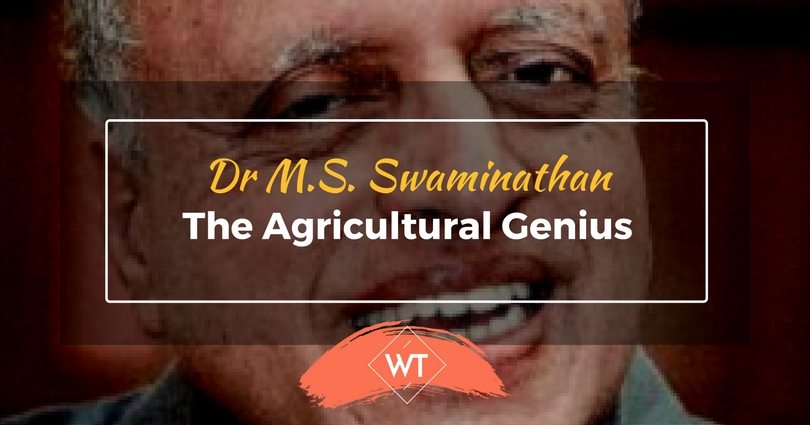 Dr M. S. Swaminathan is well known as the Father of India’s Green Revolution. He was born on August 7, 1925, in Kumbakonam, Tamilnadu.

His dedicated work on plant genetics and agricultural research produced a high-tech invention in wheat crops with staggering results that paved the way for a green revolution in India in the mid sixties.

He created a wheat plant by cross-breeding seeds from Mexico with a local species that yielded plentiful grains compared to traditional varieties. Thus the imminent famine was averted not only in India but throughout Asia. Swaminathan had his early school education at the Native High School and later at the Little Flower High School in Kumbakonam.

He was only 15 years old, when he was graduated from high school in 1940. During his school days, moral education and discipline were stressed. It molded much of his later thinking and his later activities in his life.

He also earned his PhD from the University of Cambridge. After completing further studies at Wisconsin University, he turned down the offer of professorship and decided to return home. He said, “I asked myself, why I studied genetics? It was to produce enough food in India. So I came back.”

Dr M.S. Swaminathan was from an agricultural family. He had observed how his uncles worried about their crops and the cultivation pattern.

Too much rain, too little rain, market fluctuations, pests, everything had an effect. He wanted to study plant genetics so that he could help Indian farmers to become self-sufficient in food production by becoming an agricultural scientist.

He wanted to develop new and improved varieties of seeds, better farming methods, better soil and water management. He also wanted to take the best of science and technology to the mostly illiterate rural masses that depended on agriculture not only for food but also for employment and income.

His professional career began in 1949. During the period from 1949-55, he undertook research on potato, wheat, rice and jute genetics, after which he worked on Mexican dwarf wheat varieties.

Besides serving as the Principal Secretary in the Ministry of Agriculture, Government of India, his contributions include establishment of the National Bureau of Plant, Animal and Fish Genetic Resources of India and the International Plant Genetic Resources Institute.

● The Ramon Magsaysay Award for Community Leadership in 1971, in recognition of outstanding contributions in Agricultural Research.

● The Borlaug Award in 1971 for his pioneering work in wheat.

● The Planet and Humanity Medal of the International Geographical Union was awarded in 2000 to Dr M.S. Swaminathan.

● Dr M.S. Swaminathan is also the first recipient of the Award instituted by the Association for Women in Development from Washington.

● Commandeur of the Order of the Golden Ark of the Netherlands, to honor special services rendered to the conservation of the flora and fauna in the world (1990).

● Tyler Prize for Environmental Achievement in 1991.

● UNEP–Sasakawa Environment Prize was awarded to him in 1994.

Lessons Learned from the Life of Dr M.S. Swaminathan

● The word “impossible” is not in the dictionary of Dr M.S. Swaminathan. He had studied genetics for a reason—to help the poor farmers, to make it possible for India to produce enough grain to feed its people. He has achieved what he has dreamt for India.

● Though a promising academic career awaited him in the U.S. during the 50’s. Dr M.S. Swaminathan refused to settle there. Love for his country and the passion to improve the lives of his countrymen were stronger. Passion, commitment and focused work can bring your goal closer to you.