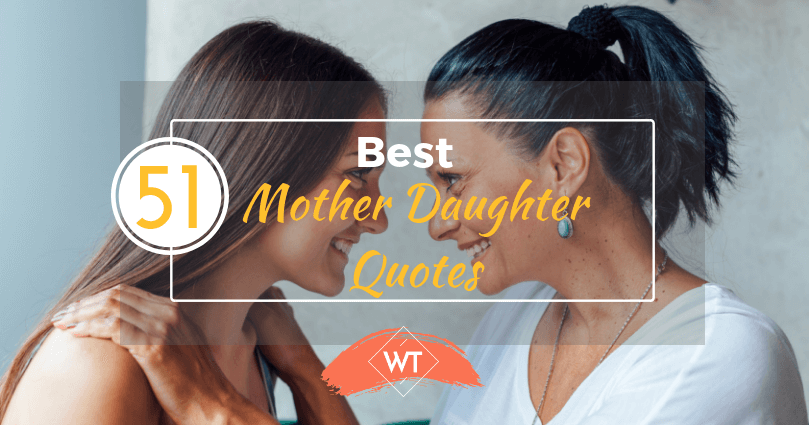 A daughter is her mother’s reflection and a mother is her daughter’s affluence. Wisdom Times presents to you heartwarming Mother Daughter Quotes which says how a mother an daughter are each other’s fortitude.

“I love my mother as trees love water and sunshine. She helps me grow, prosper, and reach great heights.” ~ Terry Guillemets (Tweet this)

“No mother and daughter ever live apart, no matter what the distance between them.”~ Christie Watson (Tweet this) 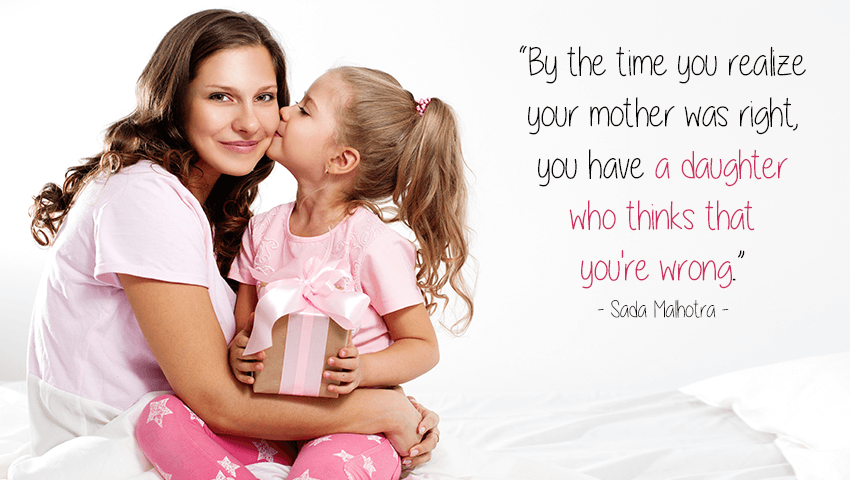 “My daughter is amazing and I’m the lucky one because I get to be her momma.”~ Anonymous (Tweet this)

“A mother’s treasure is her daughter.” ~ Catherine Pulsifer (Tweet this)

“By the time you realize your mother was right, you have a daughter who thinks that you’re wrong”  ~ Sada Malhotra (Tweet this)

“The more daughter knows the details of her mother’s life, the stronger the daughter.”~ Anita Diamant (Tweet this)

“Dear Daughter, If I could give you one thing in life, I would give you the ability to see yourself through my eyes. Only then would you realize how special you are to me. “~ Unknown (Tweet this)

“A mother who radiates self-love and self-acceptance actually vaccinates her daughter against low self-esteem.” ~  Naomi Wolf (Tweet this)

“No matter how old she may be, sometimes a girl just needs her mom.” ~ Cardinal Mermillod (Tweet this)

“A daughter is a girl who eventually grows up to be her mom’s best friend.” ~ Unknown (Tweet this)

“A daughter is a mother’s gender partner, her closest ally in the family confederacy, an extension of herself. And mothers are their daughters’ role model, their biological and emotional road map, the arbiter of all their relationships.” ~ Victoria Secunda (Tweet this)

“Every mother hopes that her daughter will marry a better man than she did, and is convinced that her son will never find a wife as good as his father did.” ~ Martin Andersen-Nexö (Tweet this)

“The only love between a mother and a daughter can’t be changed and only this love has no limits. It grows with every single day and never fades.”~ Anonymous (Tweet this) 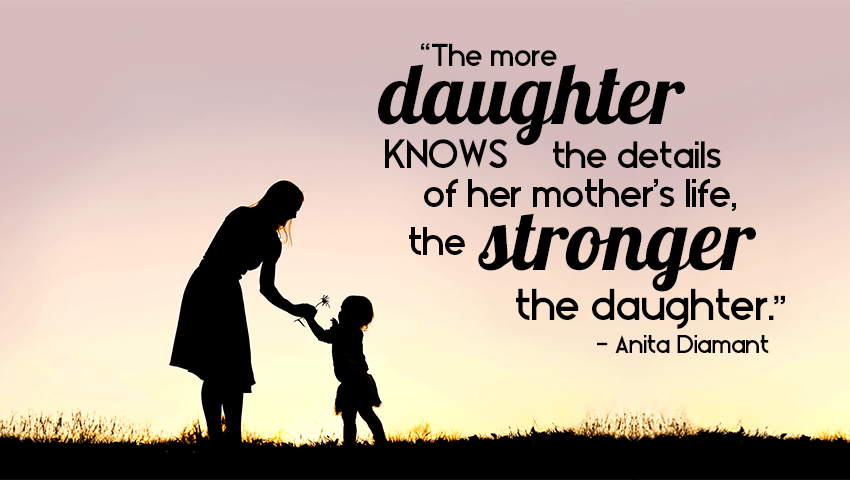 “My mom taught me a woman’s mind should be the most beautiful part of her.” ~ Sonya Teclai (Tweet this)

“My mother wanted me to be her wings, to fly as she never quite had the courage to do. I love her for that. I love the fact that she wanted to give birth to her own wings.” ~ Erica Jong (Tweet this)

“Mothers, look after your daughters, keep them near you, keep their confidence – that they may be true and faithful.” ~ Elmina S. Taylor (Tweet this)

“As long as a woman can look ten years younger than her own daughter, she is perfectly satisfied.” ~ Oscar Wilde (Tweet this)

“We mothers are learning to mark our mothering success by our daughters’ lengthening flight.” ~ Letty Cottin Pogrebin (Tweet this)

“A daughter without her mother is a woman broken. It is a loss that turns to arthritis and settles deep into her bones.” ~ Kristin Hannah (Tweet this)

This is so very adorble!

“What the daughter does, the mother did.”  ~ Jewish Proverb (Tweet this)

“My mother… she is beautiful, softened at the edges and tempered with a spine of steel. I want to grow old and be like her.” ~ Jodi Picoult (Tweet this) 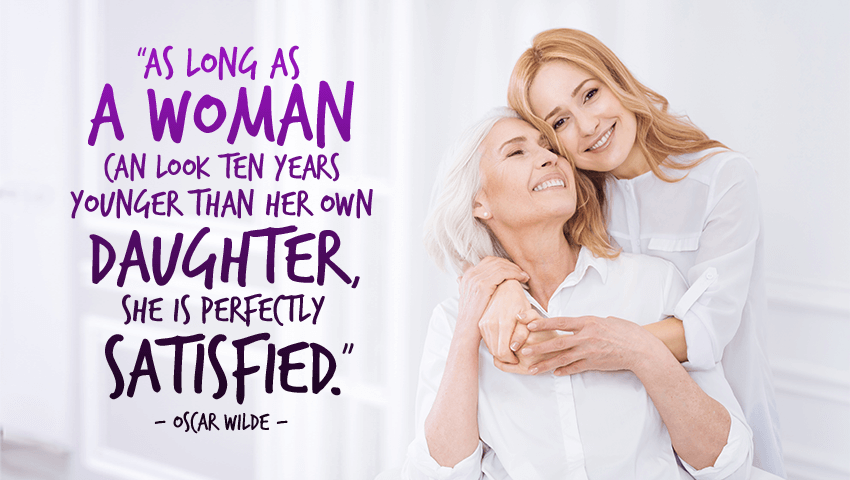 “The relationship between parents and children, but especially between mothers and daughters, is tremendously powerful, scarcely to be comprehended in any rational way.” ~ Joyce Carol Oates (Tweet this)

“Mother and daughter relationship is a special bond that spans the years. Through laughter, worry, smiles and tears. A sense of trust that can’t be broken, a depth of love sometimes unspoken.” ~ Anonymous (Tweet this)

“A mother’s arms are more comforting than anyone else’s.”~  Princess Diana (Tweet this)

“There were times when, in middle school and junior high, I didn’t have a lot of friends. But my mom was always my friend. Always.”~ Taylor Swift (Tweet this)

“All mother’s characteristics are absorbed by daughter’s personality so that it’s not clear where the mother ends and the daughter begins. It’s pure magic.” ~ Unknown (Tweet this)

“My mother taught me that reading is a kind of work and that every paragraph merits exertion, and in this way, I learned how to absorb difficult books.” ~ Hope Jahren (Tweet this)

“To describe my mother would be to write about a hurricane in its perfect power. Or the climbing, falling colors of a rainbow.”~ Maya Angelou (Tweet this)

“I will never be as good a mother as she was. She was just grace incarnate.” ~ Angelina Jolie (Tweet this) 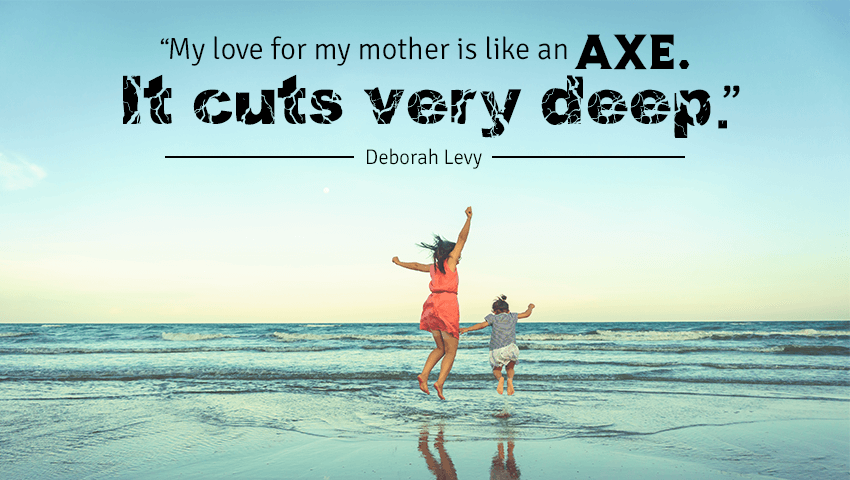 “Our daughters are the most precious of our treasures, the dearest possessions of our homes and the objects of our most watchful love.” ~ Margaret E. Sangster (Tweet this)

“I cannot forget my mother, she is my bridge.” ~ Renita Weems (Tweet this)

“A daughter will always be the closest person in the world for her mother because only she saw the heart of her mother from the inside.”~  Unknown (Tweet this)

“The lives of a mother and a daughter are connected. A mother is the daughter’s spine, she always supports her, and a daughter is the mother’s blood, which makes her strong.” ~ Anonymous (Tweet this)

“When I’ve seen your little eyes, tiny fingers, and a cute smile, I realized that finally, my life has received its sense. I love you.” ~ Unknown (Tweet this)

“Over time, we would learn each other and I would learn to love her like a mother loves a daughter, imperfectly and without roots.” ~ Vanessa Diffenba (Tweet this)

“My love for my mother is like an axe. It cuts very deep.” ~ Deborah Levy (Tweet this)

“No mother is ever, completely, a child’s idea of what a mother should be, and I suppose it works the other way around as well.” ~ Margaret Atwood (Tweet this)

“When you become a mother, you are no longer the center of your own universe. You relinquish that position to your children.”~ Jessica Lange (Tweet this)

“Mother and daughter got on very well indeed, with a deep affection founded on almost complete misunderstanding.”  ~ Mary Stewart (Tweet this)

“I need you, I need you here, I need you now. I cannot do this alone. I need my Mommy, and dammit, I don’t care who knows it.” ~ ‘GILMORE GIRLS:’ RORY ON NEEDING HER MOM (Tweet this)

“Never grow a wishbone, daughter, where you backbone ought to be.” ~ Clementine Paddleford (Tweet this) 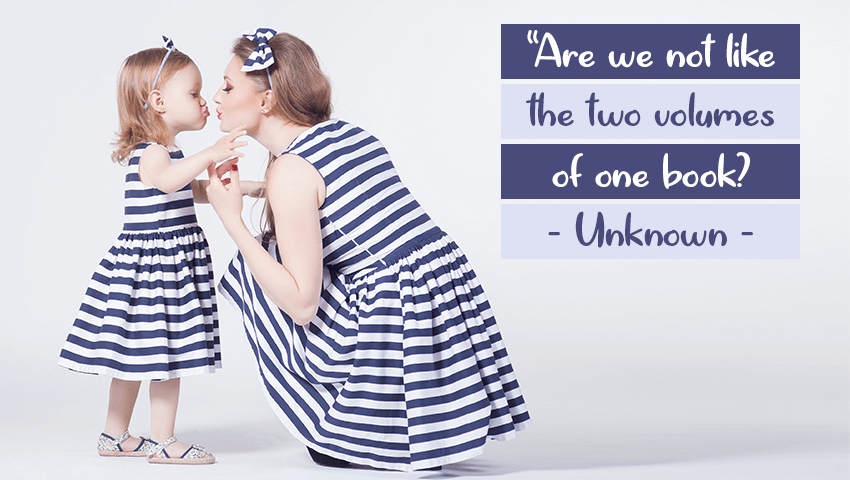 Hope this collection of best of mother daughter quotes has bought all the mothers and daughters a step closer. The true meaning of these sayings can only be understood by those mothers and daughters who have been in this beautiful relationship completely and those who have come out happy through all the feelings between them and have made their mother-daughter bond even more stronger.