9 Reasons Why Men Cheat: It’s Not What You Think! 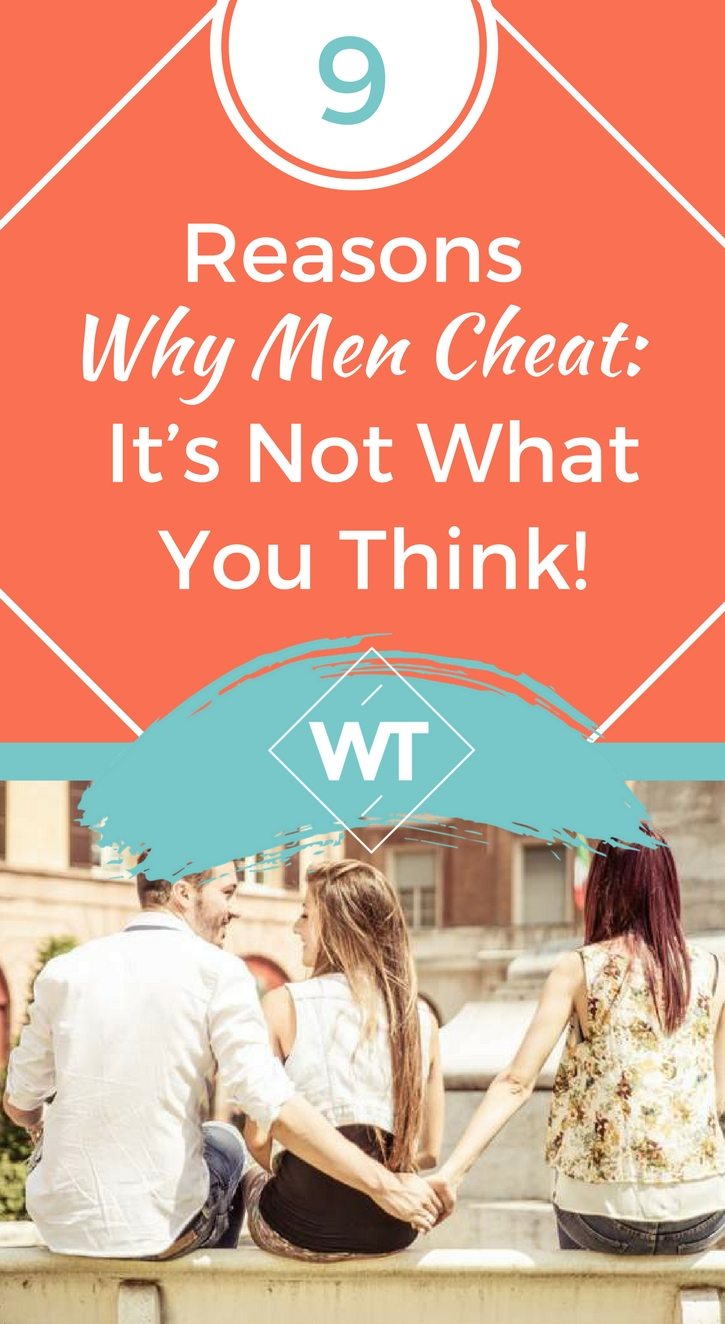 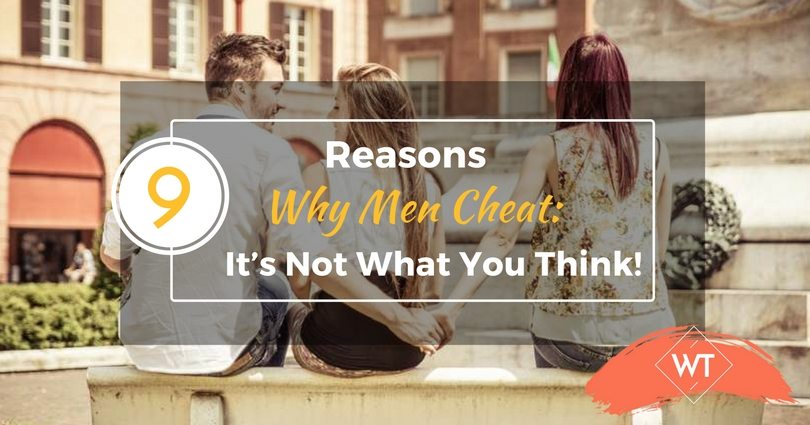 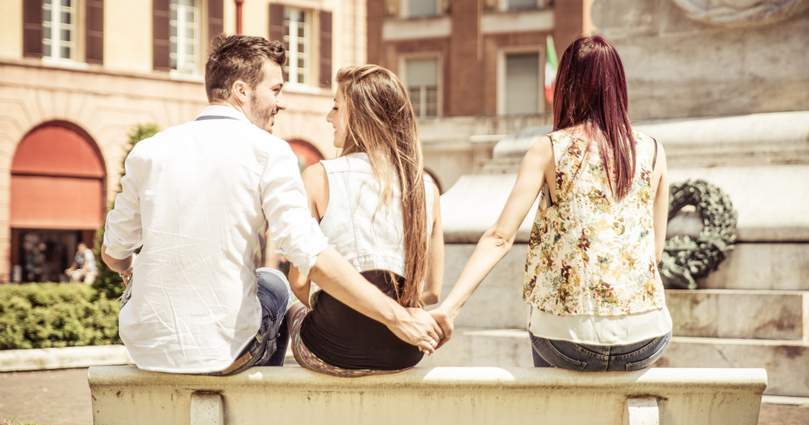 It might sound ordinary for a woman to find out her husband’s cheating on her, but not if you’re the woman and it’s your husband. ~ Melissa Bank (Tweet this)

It’s the 21st Century and it’s all about equality, but when it comes to cheating, common statistics still point that men are in the lead. Is that really so? And if it is, why does it happen?

Just a few decades ago, in the Mad Men era, the answer to why men cheat would have been obvious: sex. But today, sex barely makes the list of top 9 reasons why men cheat.

So how did we discover the top 9 reasons? We asked, we researched, we counted, so that you know what to do and, hopefully, what not to do when it comes to the possibility of your husband having an affair. And, unfortunately, that is a possibility for all of us married gals.

1. She only cares about the kids

These 9 reasons are not in order of “what’s most common,” but even if they were, I’m sure this would still be number one. When a woman has children, she feels compelled to spend every waking minute taking care of them.

This is true especially in the beginning, when your hormones are going crazy and your mother instincts entirely overtake your personality. And men are understanding for a while, especially since they also experience what it is to be a father for the first (or second, or third) time.

But then weeks pass by. Weeks turn into months. Sometimes months turn into years and sex becomes either completely absent from your marriage routine, or so rare that neither of you gets enough. And while women are fine with having less sex (or at least that’s what some of them claim), most men flip out and go look for it some place else.

An easy way to prevent this from happening is get some help with raising your little one(s) and book some time for just you and your partner. Also, don’t forget to show him he’s still important for you daily.

You can’t imagine how easy this is. Just ask him how his day was (even if you’re not going to hear the answer) or tell him ‘thank you’ when he helps, or even when he just sits there listening to you complaining and tries to understand.

2. I just don’t feel it anymore

Unfortunately, sometimes love goes out the window. It doesn’t happen overnight and if you think you still have the chance to stop it from leaving your relationship forever, get instant access to our happy marriage course, here. But if it’s gone, what often happens is that men find it with another woman.

The most horrible part of this particular answer to why men cheat is that women are often completely unaware that their partner doesn’t really love them anymore. Men are afraid not to hurt our feelings, so they will act respectfully. And even if something does change, they will make excuses related to work or anything else outside of your scope.

Here’s how you know for sure that something is going on:

If it has come to this and especially if you have found out that he’s cheating, the best thing to do is end the relationship (no matter how difficult). There is someone out there who will love you, all of you, forever and ever, and you deserve that.

That sounds horrible, doesn’t it? But the sad truth is that if your partner is some place with people you don’t know and have absolutely no relation to, and if opportunity arises, most men would take advantage.

It’s not that they don’t love you. Women and men see sex differently. For them, it may be just about the sport. But it still hurts. So how can you prevent this from happening to you?

Here’s the answer a man gave me when I asked him that same question. ‘I wouldn’t do it if I’m already having a lot of fun and don’t want to risk that even a little bit.’

So there you have it. If you don’t want your partner to have fun someplace else, you have to be fun. And I know it’s difficult when you’re also trying to raise his children, keep the household together and grow in your career, but the truth is we’re all fun. Some women just forget that. Find a way to remember it; and he will too.

One thing is for sure: you definitely have to reconsider a relationship with someone who cheats because he’s bored. If you’re bored, find a hobby. Read a book. Watch a movie. Go out for a walk. Right?

Unfortunately, some men just need more rush than others. Something you can do is to let him have this rush in the real world (that’s how he won’t need to find it in someone’s bedroom).

Many women do this. In the beginning, when they fall for a guy:

But once we settle down:

That’s how, slowly, we forbid our man from being who he is. So he gets bored. And when he gets really, really bored… Well. Let’s just say you’d prefer him jumping out of a plane than into someone else’s bed.

5. I want a woman who wants me

There is something HUGE that every man has. His ego. Men have to feel desired. Women have to feel desired, too, but for different reasons. Women want to feel validated and appreciated for who they are. Men need to feel superior. It’s in their DNA, they simply must be the best. And there’s only one way for a man to feel like the best: through the eyes of the woman next to him.

That leads to an interesting conundrum. Because, even if in the beginning of the relationship when you were crazy in love you did feel like your man is the best in the world, time passes by and sooner or later, reality hits.

And when it does, us, women, don’t just start to see his disadvantages in addition to his amazing qualities. No. We have this switch that turns things from perfect to horrible. All of a sudden, everything about him annoys you and sometimes you even wonder if you could have done better (admit it!).

Some women think they manage to hide the way they feel, but they really don’t. It shows. And when it shows, men go looking for a woman who will see them as “the best” again.

I know you wonder what can you possibly do to prevent this particular reason why men cheat. It’s not like you can turn back time. Well, that won’t be necessary. What you focus on expands, remember. If you accept that your partner isn’t perfect—like all of us—and you focus on his great qualities, encouraging him to do and be what you love… Then he will do and be just that. And then, once again, he will be the best in your eyes.

To be honest with you, I never think that sex is just about sex. Even when men claim it is. But apparently, sometimes it really is all about sex. If you’re one of the shy ones and your husband wants to experiment with all kinds of unspeakable things, he could start to look for these experiments outside the relationship.

What can you do about this? It’s pretty obvious. Open yourself to the opportunity of becoming what men consider a sex goddess by experimenting a bit. Then again, if that’s really not you, consider how important your relationship is for you, and how much you value faithfulness. As a last resort, get out of it and find someone who’s not that sex-crazy and will respect your boundaries.

7. She cheats/has cheated on me too

But what if you haven’t cheated and have no intention of doing so, but he’s really jealous and so he “just knows” you’ve been in bed with someone else while you two were together? And what if he uses this illusion he has created himself as an excuse for him to cheat on you?

Well, then, major asshole alert. Seriously, you deserve better than this. You deserve someone who trusts you and who can be trusted in return. Just leave. Leave right now.

Did you leave yet?

8. She’s too busy with her career

Don’t get me wrong, I’m not supporting this. It’s the 21st Century and a woman should be free to be a mother, a career success, a wife and all of those together. But the thing is, you only have 100% of yourself to give.

That’s it! There’s no more. I actually recently realized that as I was wondering whether to focus on my book, or my article writing, or my freelance career. And I thought “I wish I could give them all 100%.” But you know what, I can’t. And you can’t either.

9. She really let herself go

Ahh, the way we look. You’ve probably heard that women love with their ears and men one with their eyes. It’s true. Men need you to look great. Not perfect. We’re not talking not a single pound of extra weight, or not a single hair on your legs.

We’re talking “great.” As in taking care for yourself and feeling awesome in your skin. As in smiling more often and putting make up when you go out together. As in wearing high heels at least once in awhile.

Men’s eyes wander. But if you look great, his will wander right back to you. I promise.

If a man is not faithful to his own individuality, he cannot be loyal to anything. ~ Claude McKay (Tweet this)

Ultimately, the only reason for us to know why men cheat is to be able to decide what to do to prevent it and what to do after it has happened. And hopefully, this article has given you insight on both.