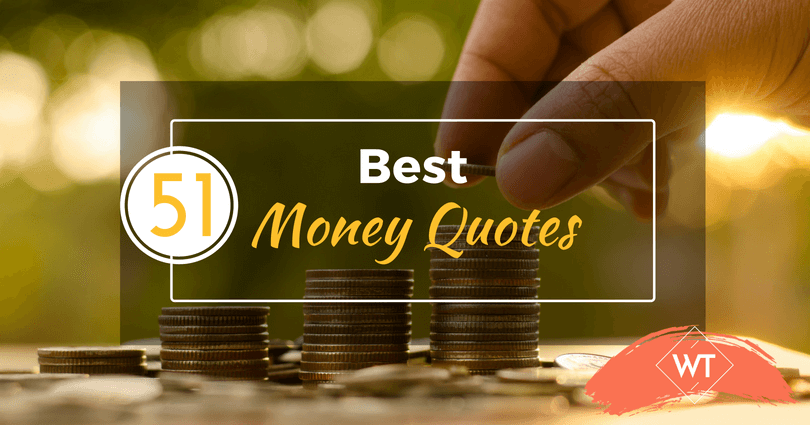 Money, the most prominent thing on earth that everyone lives for and everyone makes a living out of it and also insignificantly craves for it. Money has made us all slaves. With these 51 Best Money Quotes we hope you would be able to analyze the value of it and respect it and definitely keep a count of it. Now here are those best money quotes happily brought to you by Wisdom Times 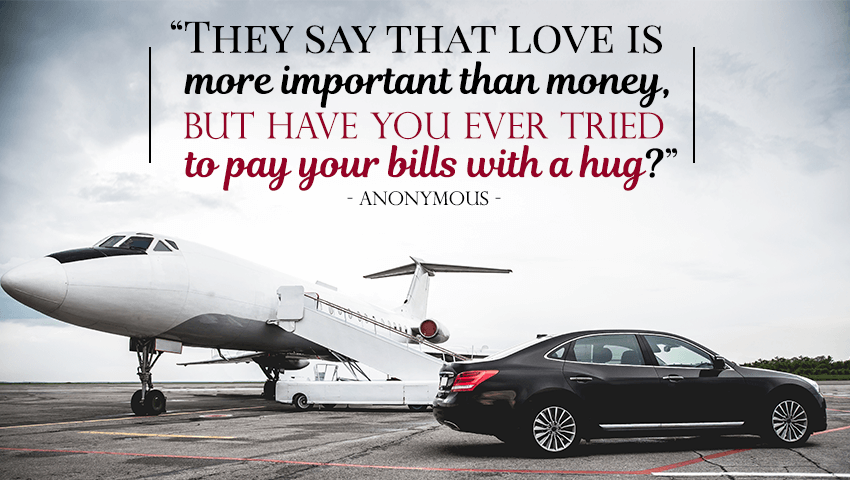 To get rich, you have to be making money while you’re asleep. ~  David Bailey (Tweet this)

A wise man should have money in his head, but not in his heart. ~ Jonathan Swift (Tweet this)

Too many people spend money they earned… to buy things they don’t want… to impress people that they don’t like. ~  Will Rogers (Tweet this)

Wealth consists not in having great possessions, but in having few wants. ~ Epictetus (Tweet this) 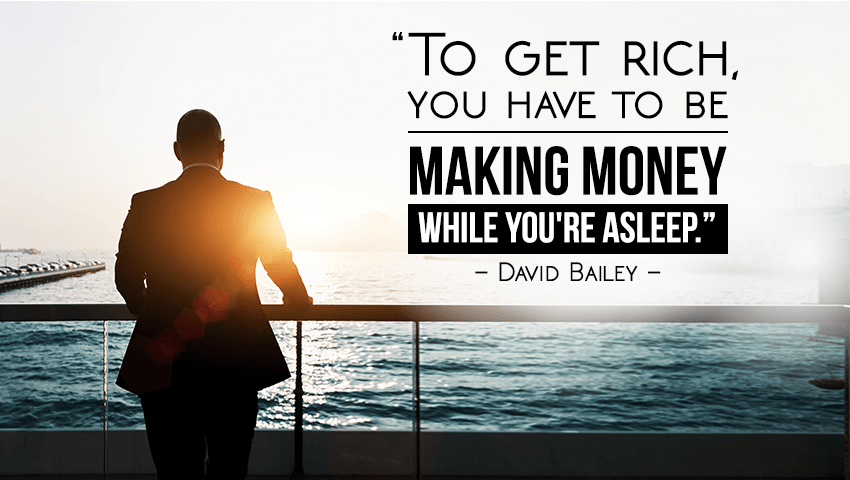 Money is a guarantee that we may have what we want in the future. Though we need nothing at the moment it ensures the possibility of satisfying a new desire when it arises. ~  Aristotle (Tweet this)

Money often costs too much. ~ Ralph Waldo Emerson (Tweet this)

Everyday is a bank account, and time is our currency. No one is rich, no one is poor, we’ve got 24 hours each. ~  Christopher Rice (Tweet this)

Money never made a man happy yet, nor will it. The more a man has, the more he wants. Instead of filling a vacuum, it makes one. ~ Benjamin Franklin (Tweet this)

Money is only a tool. It will take you wherever you wish, but it will not replace you as the driver. ~ Ayn Rand (Tweet this)

Happiness is not in the mere possession of money; it lies in the joy of achievement, in the thrill of creative effort. ~ Franklin D. Roosevelt (Tweet this)

Money is a terrible master but an excellent servant. ~  P.T. Barnum (Tweet this)

You must gain control over your money or the lack of it will forever control you. ~  Dave Ramsey (Tweet this)

Never spend your money before you have it. ~  Thomas Jefferson (Tweet this)

The best thing money can buy is financial freedom. ~  Unknown (Tweet this)

Wealth is like sea-water; the more we drink, the thirstier we become; and the same is true of fame. ~  Arthur Schopenhauer (Tweet this) 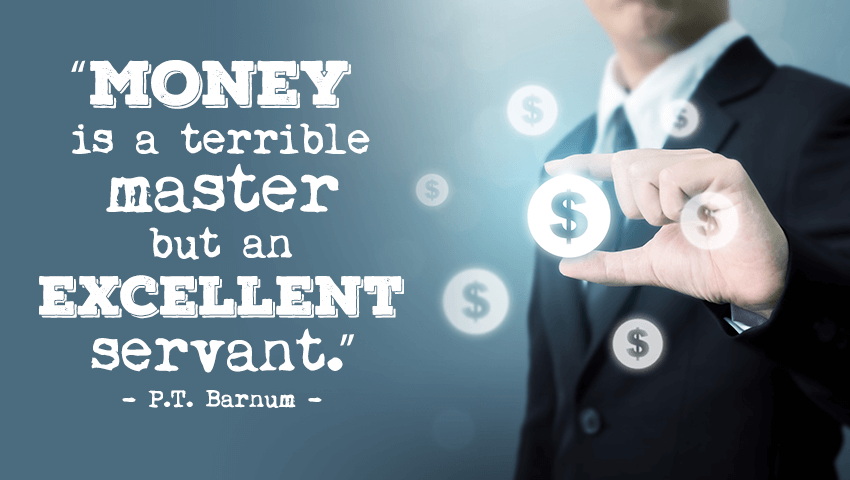 If you want to know what God thinks of money, just look at the people he gave it to. ~  Dorothy Parker (Tweet this)

A Penny Saved is a Penny Earned. ~  Benjamin Franklin (Tweet this)

While money can’t buy happiness, it certainly lets you choose your own form of misery. ~ Groucho Marx (Tweet this)

Making money isn’t hard in itself… What’s hard is to earn it doing something worth devoting one’s life to. ~  Carlos Ruiz Zafón (Tweet this)

Don’t think money does everything or you are going to end up doing everything for money. ~  Voltaire (Tweet this)

You can be young without money, but you can’t be old without it. ~  Tennessee Williams (Tweet this)

Money won’t create success, the freedom to make it will. ~  Nelson Mandela (Tweet this)

Money is a great servant but a bad master. ~ Francis Bacon (Tweet this)

Money can’t buy friends, but you can get a better class of enemy. ~  Spike Milligan (Tweet this)

Not he who has much is rich, but he who gives much. ~ Erich Fromm (Tweet this)

Never stand begging for that which you have the power to earn. ~  Miguel de Cervantes (Tweet this)

There’s no money in poetry, but then there’s no poetry in money, either. ~  Robert Graves (Tweet this) 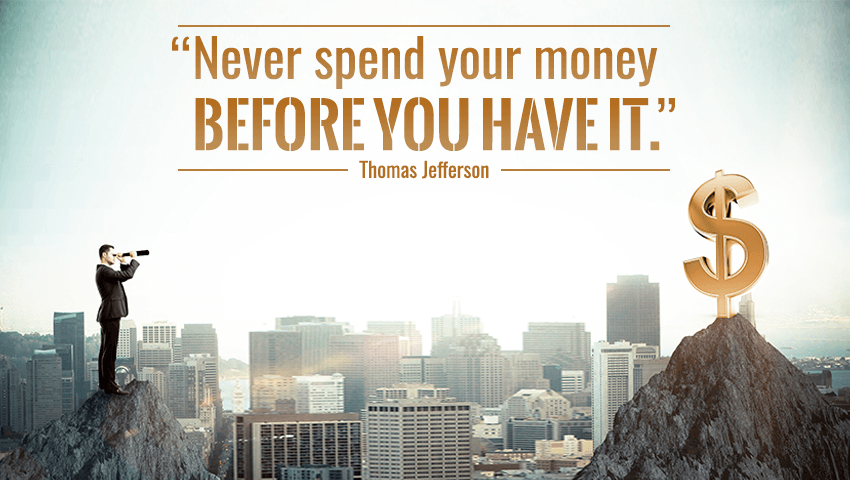 When it is a question of money, everybody is of the same religion. ~  Voltaire (Tweet this)

This one sentence says everything.


Money is power, freedom, a cushion, the root of all evil, the sum of blessings. ~ Carl Sandburg (Tweet this)

The art is not in making money, but in keeping it. ~ Proverb (Tweet this)

Money is the wise man’s religion. ~ Euripides (Tweet this)

Money can’t buy happiness, but it will certainly get you a better class of memories. ~ Ronald Reagan (Tweet this)

Never ask of money spent Where the spender thinks it went. Nobody was ever meant To remember or invent What he did with every cent. ~  Robert Frost (Tweet this)

When I had money everyone called me brother. ~  Polish Proverb (Tweet this)

If you think nobody cares if you’re alive, try missing a couple of car payments. ~ Earl Wilson (Tweet this)

Time is the coin of your life. It is the only coin you have, and only you can determine how it will be spent. Be careful lest you let other people spend it for you. ~ Carl Sandburg (Tweet this)

Wealth consists not in having great possessions, but in having few wants. ~ Epictetus (Tweet this) 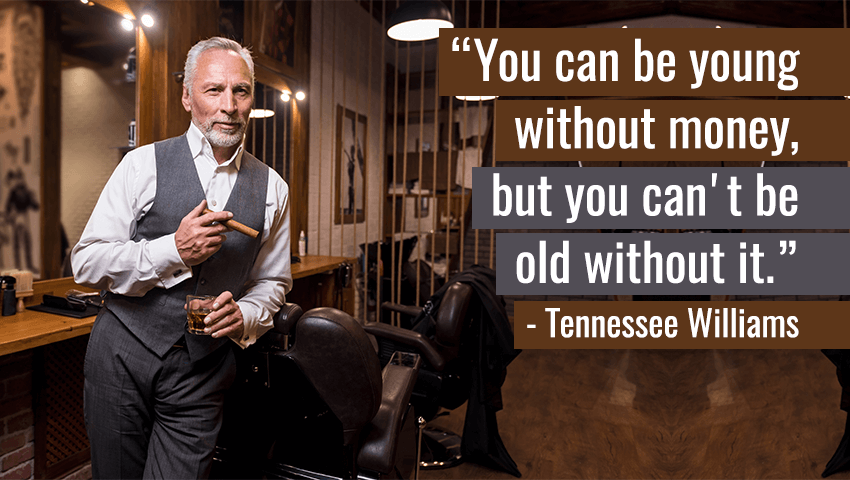 Wealth is the slave of a wise man. The master of a fool. ~  Seneca (Tweet this)

No man should receive a dollar unless that dollar has been fairly earned. ~ Theodore Roosevelt (Tweet this)

The hardest thing to find in life is happiness – money is only hard to find because it gets wasted trying to find happiness. ~  Unknown (Tweet this)

Money has never made man happy, nor will it, there is nothing in its nature to produce happiness. The more of it one has the more one wants. ~ Benjamin Franklin (Tweet this)

Time is more valuable than money. You can get more money, but you cannot get more time. ~ Jim Rohn (Tweet this)

Money cannot buy peace of mind. It cannot heal ruptured relationships, or build meaning into a life that has none. ~ Richard M. DeVos (Tweet this)

The safe way to double your money is to fold it over once and put it in your pocket. ~ Frank Hubbard (Tweet this)

Money is good for nothing unless you know the value of it by experience. ~ P.T. Barnum (Tweet this)

They say that love is more important than money, but have you ever tried to pay your bills with a hug? ~ Veena (Tweet this)

If it could be said ‘you make money, but do not let money make you’, one should always be kind to life and to god for whatever they have and should never contemplate for money. Wisdom Times always believes, ’When one wants to live a purposeful life, money would be the last thing they would want for in their life. We hope these ’51 best money quotes’ have motivated you to make and save money.

Now that you are making enough money, savings would have been your top priority in such a scenario. So if it’s the savings that is bothering you for not being able to save anything by the end of the month don’t worry, we’ve got it for you. Please go through our article 20 Awesome Ways To Save Money for some very effective ideas on how to save more responsibly and lead a richer living.