Lessons from Ramayana – Righteousness and Tolerance 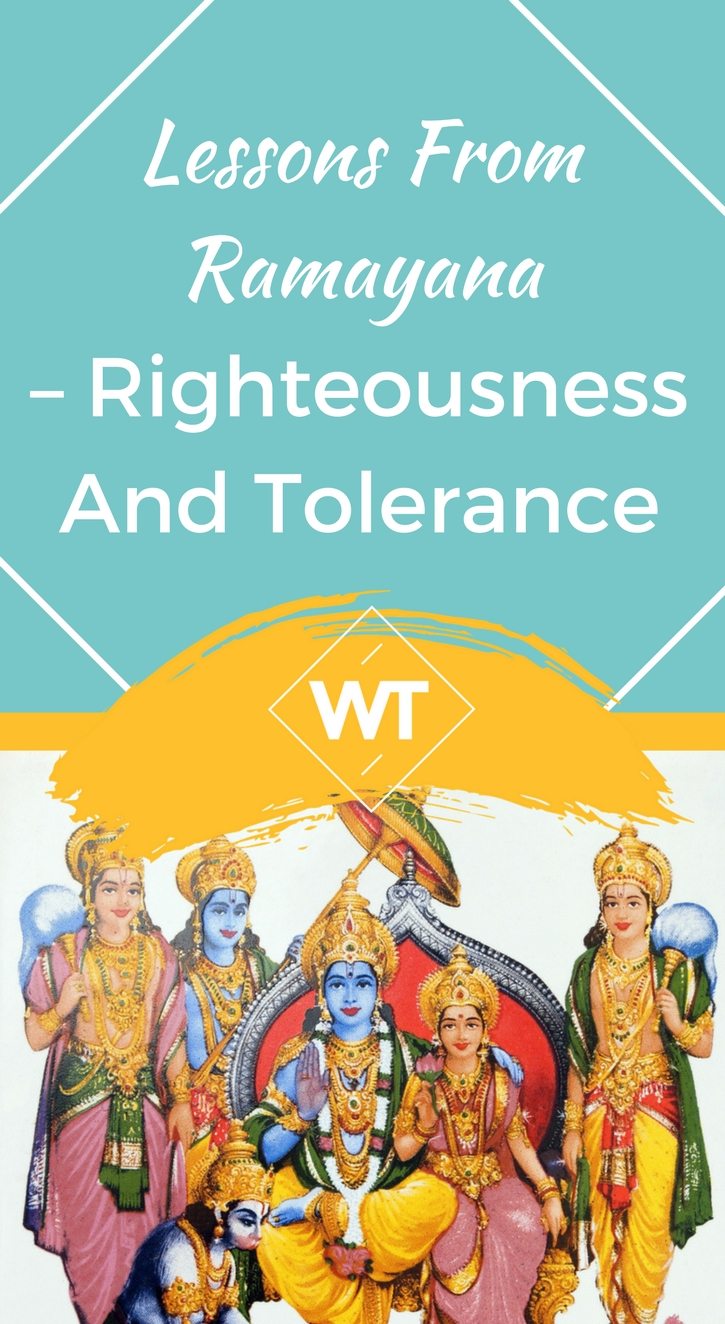 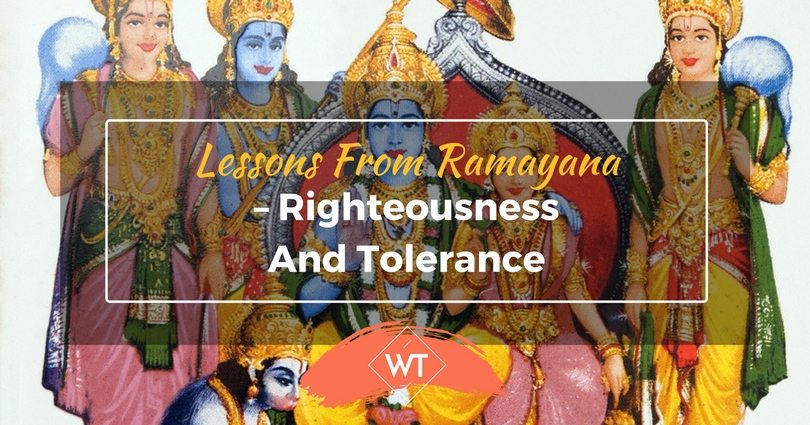 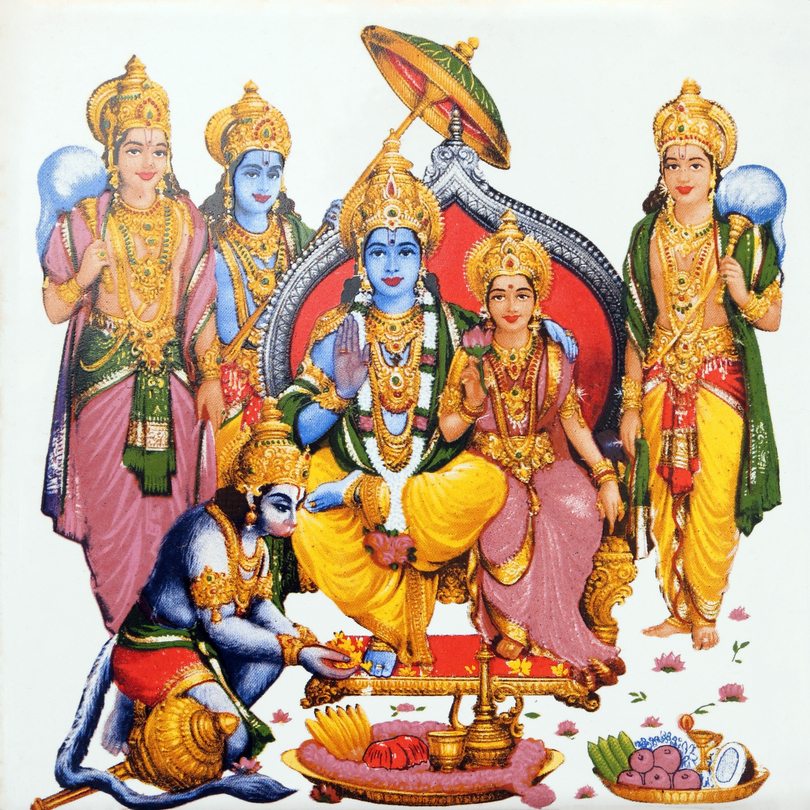 Ever wondered why the two great epics of India—the Ramayana and the Mahabharata—continue to hold the subcontinent under their sway even centuries after they were written? The answer lies in the timeless wisdom the two contain which is as useful for people today as it was in the bygone era.

In pursuing Dharma (righteousness), both Artha (materialistic pleasures) and Kama (sense pleasures) can be and must be sacrificed. These two pursuits should never be at the cost of Dharma. Lessons from Ramayana are plenty but one of the most important is that the ultimate goal of life is Moksha (liberation) and it can be attained only by relinquishing Artha and Kama and by strictly following a life of Dharma.

Sri Rama the man of eternal values is the 7th incarnation of Lord Vishnu and the central figure of Ramayana which is the complete guide to god-realization and the path which lies to righteousness and tolerance.

Unlike most other works in the world which can be neatly categorized under the secular or non-religious category like Machiavelli’s ‘Prince’ that deals with statecraft or religious scriptures which comment on matters of the spiritual world, both the Ramayana and the Mahabharata locate their spiritual lessons within the context of the real world.

Statecraft, family responsibilities, duties of the rulers towards citizens and the necessary struggle that the forces of good need to wage against the forces of evil occupy centre stage in these epics. Lessons from Ramayana, whenever read, gives us a great insight to the very high moral and ethical standards of the yore; at times of mental turmoil, we get enlightenment by reading Ramayana.

The Universality of Indian Philosophy

If we are to study the central lessons of the Ramayana, we will observe that the epic revolves around the life lessons that we can learn from the “Maryada Purushottam” or the “Ideal Man” who upholds eternal values. Like Krishna who was to incarnate Himself many years later, Sri Rama the man of eternal values is the ‘Preserver of  the Cosmic Trinity.’

It is both the promise as well as the intention of the Lord to manifest Himself in every age when the social structure is shaken to the roots by the forces of evil, in order to restore the Law of Dharma.

Hindu religion looks at the entire cosmos as having originated from a common source—a fact that even modern science and physics now hold to be true. Therefore, in Hindu philosophy, there is no place for discrimination on the basis of religion, ideology or worldview, either with other religions and belief systems on one hand or with modern science on the other hand.

The central themes in Rama’s epic story include obedience to the instructions of respected elders. When He is instructed to go to the forests on a “vanavas” for 14 years, He agrees smilingly and his younger brother Bharata, out of respect for Rama’s legitimate claim to the throne, installs His “charan padukas” on the throne of Ayodhya and rules for 14 years on Rama’s behalf, as His agent.

When Sita is kidnapped by the evil Ravana since he is intoxicated by Her grace and beauty, Sri Rama the man of eternal values unleashes a military campaign and a righteous war even geographically as far away as Lanka (Ravana’s kingdom) in order to release his wife from Ravana’s confinement as well as save the citizens of Lanka from the rule of the demons led by Ravana.

Lessons from Ramayana – A Model of Enlightenment and Non-discrimination

During the vanavas as well as while prosecuting the military campaign, Lord Rama breaks many dogmatic, exploitative and prejudiced social taboos thereby setting an example for future generations of Indians—first by accepting berries at the hut of a so-called low born Shabari who was one of His ardent devotees. Similarly, when he is befriended, loved and worshipped by the vanar sena in the jungles led by Lord Hanuman,

Lord Rama readily accepts their support and love. Many modern mythologists and sociologists in India now feel that the vanar sena actually represents the indigenous people of the forests who Lord Rama had befriended during the campaign against Ravana.

If that is indeed the case, then Lord Rama, in an ancient age, demonstrated the very modern and contemporary political position of not discriminating on the basis of birth or genetic features and culture—something that rings true even in the modern world with all its struggles and victories against apartheid, imperialism, colonialism, racial discrimination and caste-based exploitation.

Sri Rama the man of eternal values—the Lord of the Universe—is for all people, for all time. He is on the side of the oppressed, the marginalized, and the exploited. Everyone engaged in the age-old struggle of fighting on the side of good versus evil can still leaf through the pages of the Ramayana to derive inspiration from the life of the Maryada Purushottam.

A Case in Point

The Father of the Nation, Mahatma Gandhi, one of the most secular and enlightened Indians to have ever graced our country, drew inspiration from the life of Rama. His dream was to institute ‘Ram Rajya’ in independent India, free from the yoke of colonialism.

Even when he was brought down by a fanatic’s bullets, the last words that Gandhi uttered were “Hey Rama.” Those words are immortally inscribed on Gandhiji’s Samadhi at Rajghat in New Delhi where he was cremated in the Year 1948, one year after leading India to freedom through a long and non-violent struggle against imperialism.

When the political situation in India became communally charged before independence and he was asked for his views on the same, Gandhiji had memorably replied: “Hindus and Muslims of India are like my two eyes. If you ask me which one I should gouge out, what answer can I give you.” Such an approach of non-discrimination was what one of the foremost devotees of Lord Rama had learnt from His life!

Ramayana says that Sri Rama’s reign is called Rama Rajya. There is righteousness and prosperity everywhere. The values that Lord Rama displayed in his life (respect for elders, loyalty towards those who loved and worshipped him, waging a battle against the forces of evil no matter what the personal cost, respect for all sections of society and non-discrimination against the fellow inhabitants of the planet) are timeless and eternal.

Lessons from Ramayana are as relevant as the cornerstones of our modern republic as they were at the time of the Ramayana. They are values that every person would consider worth imbibing.

Ramayana contains the highest ideals of Hindu culture and civilization. The lessons from Ramayana are soul-stirring. It is a textbook of morals for the youth to inspire them to lofty and sublime ideals of conduct and character.

Lessons from Ramayana exercise a great power on the life of man. It contains object lessons for husbands and wives, parents and children, brothers and sisters, friends and enemies!