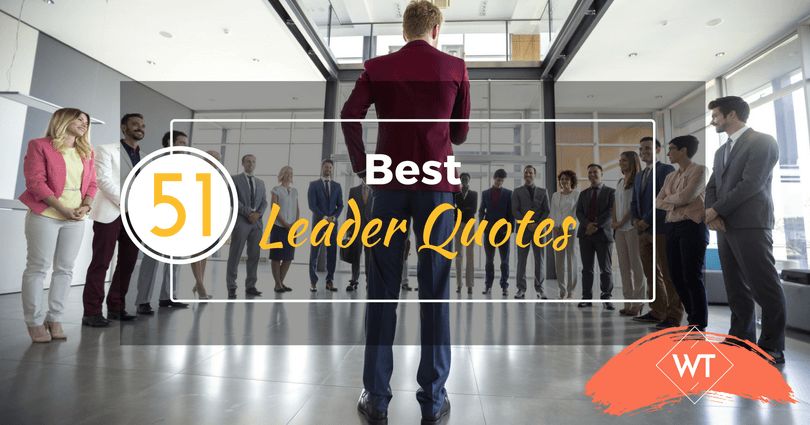 Do you think you have the capability of leading a group? Do you want some inspiration from the world’s best leaders? You’re here at the right place. Wisdom Times happily presents to you the 51 Best Leader Quotes. 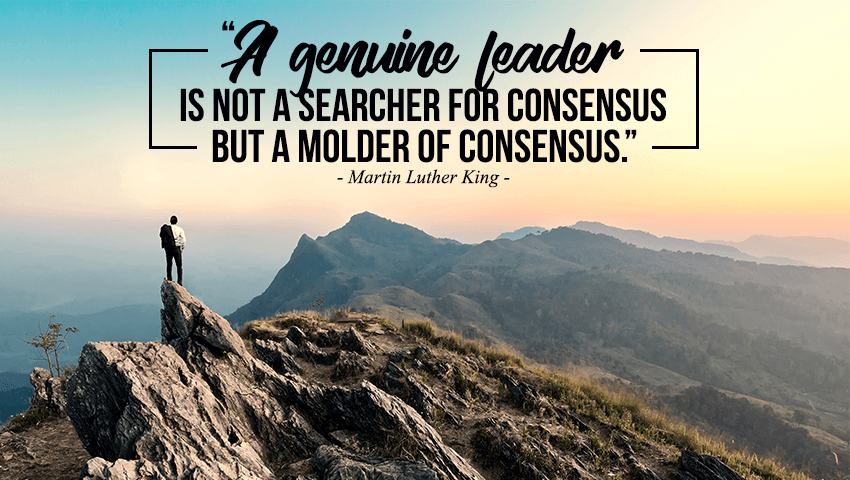 A leader is one who knows the way, goes the way, and shows the way.  ~ John C. Maxwell (Tweet this)

If your actions inspire others to dream more, learn more, do more and become more you are a leader.  ~ John Quincy Adams (Tweet this)

The quality of a leader is reflected in the standards they set for themselves.  ~ Ray Kroc (Tweet this)

A genuine leader is not a searcher for consensus but a molder of consensus.  ~ Martin Luther King. Jr. (Tweet this)

A leader is admired, a boss is feared.  ~ Vicente del Bosque (Tweet this)

A leader leads by example not by force.  ~ Unknown (Tweet this)

Leading means running fast enough to keep ahead of your people. ~ S.M. Stirling (Tweet this)

A leader is best when people barely know he exists, when his work is done, his aim fulfilled; they will say we did it ourselves. ~ Lao Tzu (Tweet this) 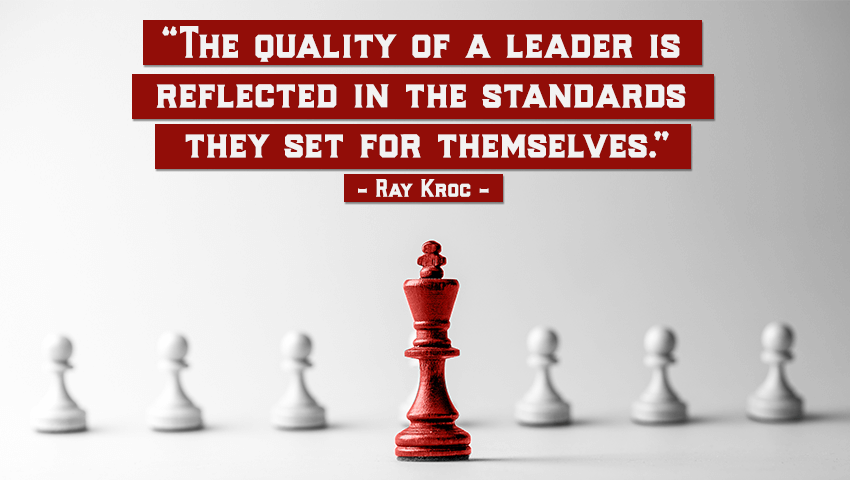 A leader does not deserve the name unless he is willing occasionally to stand alone. ~ Henry A. Kissinger (Tweet this)

A leader has the vision and conviction that a dream can be achieved. He inspires the power and energy to get it done. ~ Ralph Lauren (Tweet this)

To lead people, walk behind them. ~  Lao Tzu (Tweet this)

Today a reader, tomorrow a leader. ~ Margaret Fuller (Tweet this)

Great leaders don’t set out to be a leader…they set out to make a difference. It’s never about the role-always about the goal. ~ Unknown (Tweet this)

Do not wait for a leader…look in the mirror, it’s you. ~ Unknown (Tweet this)

If your actions inspire others to dream more, learn more, do more and become more, you are a leader. ~ John Quincy Adams (Tweet this)

Self-leaders are still true leaders even if they have no known followers. True leaders inspire by the influence of their characters and general self-made brands. Leadership is defined by the virtues of one behaviour. ~  Israelmore Ayivor (Tweet this) 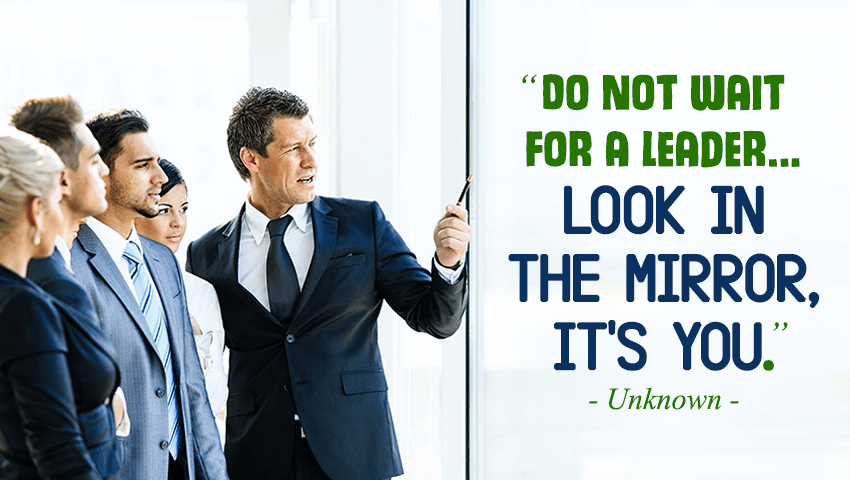 True leaders are like statues, whether it rains or it shines, they never bend their necks to look backwards! They never run away from challenges!  ~ Israelmore Ayivor (Tweet this)

You don’t lead people by what you say to them; you lead them by what they see you do. True leaders are self-leaders.  ~ Israelmore Ayivor (Tweet this)

I was inspired by this leader quote.


When picking a leader, choose a peacemaker. One who unites, not divides. A cultured leader who supports the arts and true freedom of speech, not censorship. ~  Suzy Kassem (Tweet this)

A good leader is one who reveals to you your own potential and then inspires and shows you how to reach your potential. ~  Debasish Mridha (Tweet this)

Only one man in a thousand is a leader of men — the other 999 follow women. ~ Groucho Marx (Tweet this)

Great leaders can see the greatness in others when they can’t see it themselves and lead them to their highest potential they don’t even know.  ~ Roy T. Bennett (Tweet this)

Don’t tell people how to do things, tell them what to do and let them surprise you with their results. ~ George S. Patton Jr. (Tweet this)

Leaders must be close enough to relate to others, but far enough ahead to motivate them. ~  John C. Maxwell (Tweet this)

Being a leader is making the people you love hate you a little more each day. ~ Patrick Ness (Tweet this)

A leader is a dealer in hope. ~  Napoléon Bonaparte (Tweet this)

Leaders are limited by their vision rather than by their abilities. ~ Roy T. Bennett (Tweet this) 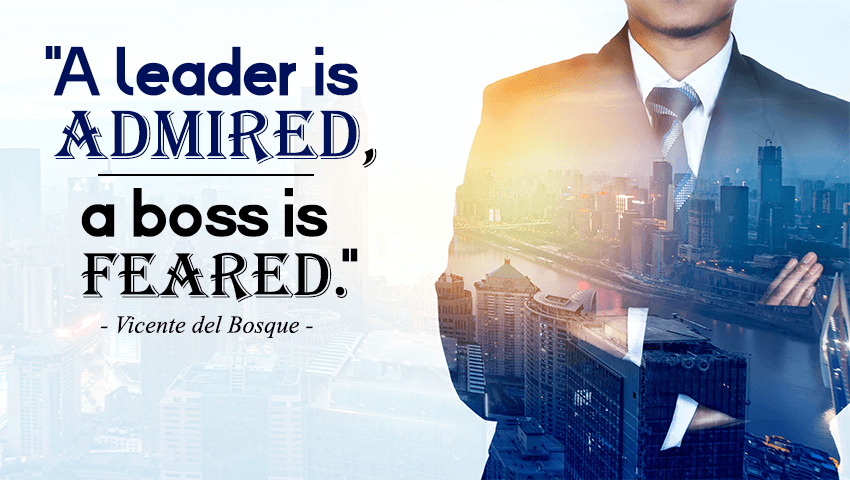 Leaders live by choice, not by accident. ~ Mark Gorman (Tweet this)

There is a difference between being a leader and being a boss. Both are based on authority. A boss demands blind obedience; a leader earns his authority through understanding and trust. ~  Klaus Balkenhol (Tweet this)

And if the blind lead the blind, both shall fall into the ditch. ~  Anonymous (Tweet this)

Leaders always choose the harder right rather than the easier wrong. ~  Orrin Woodward (Tweet this)

A leader must carry this kind of attitude.


True leaders understand that leadership is not about them but about those they serve. It is not about exalting themselves but about lifting others up. ~ Sheri Dew (Tweet this)

Cream always rises to the top… so do good leaders. ~ John Paul Warren (Tweet this)

Every great leader can take you back to a defining moment when they decided to lead . ~ John Paul Warren (Tweet this)

No great manager or leader ever fell from heaven, its learned not inherited. ~ Tom Northup (Tweet this)

When eagles are silent, parrots begin to chatter. ~  Winston S. Churchill (Tweet this)

Leaders in OVER their heads is the mere result of getting ahead of their intended SEASON. ~  John Paul Warren (Tweet this)

Leading people is like cooking. Don’t stir too much. It annoys the ingredients  and spoils the food. ~  Rick Julian (Tweet this)

And a leader has to command confidence, and consent. ~  John Christopher (Tweet this)

Two main definitions of a true leader; His presence is noticed and his absence is felt… ~ Israelmore Ayivor (Tweet this) 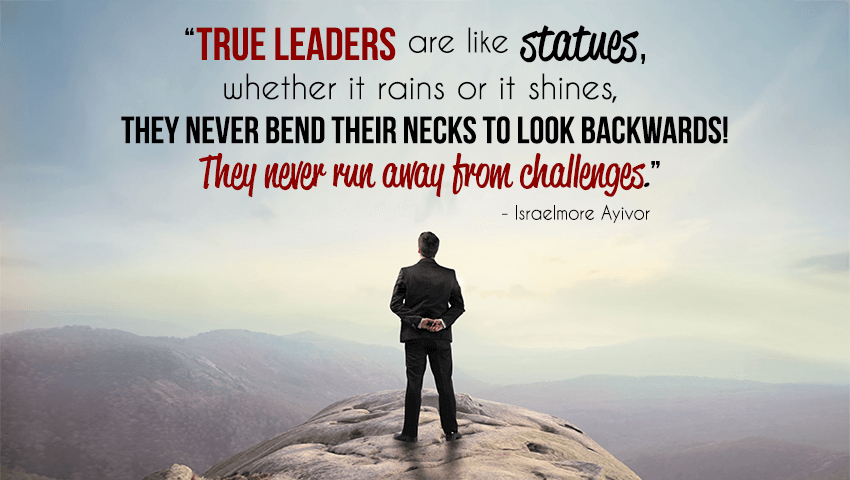 With these 51 best leader quotes we hope you have had enough options to mould yourself into becoming a good leader. We would definitely want to add your quote one day to this list of best leader quotes and it would be our pleasure to do so.

If you want to know what it takes to become a great leader and if you are looking out for some of the credible qualities of a good leader, you must check out Wisdom Times’ article on Qualities Of A Good Leader which will definitely help you to ignite your career and build a successful life.

Wisdom Times wishes you all the success. Cheers!