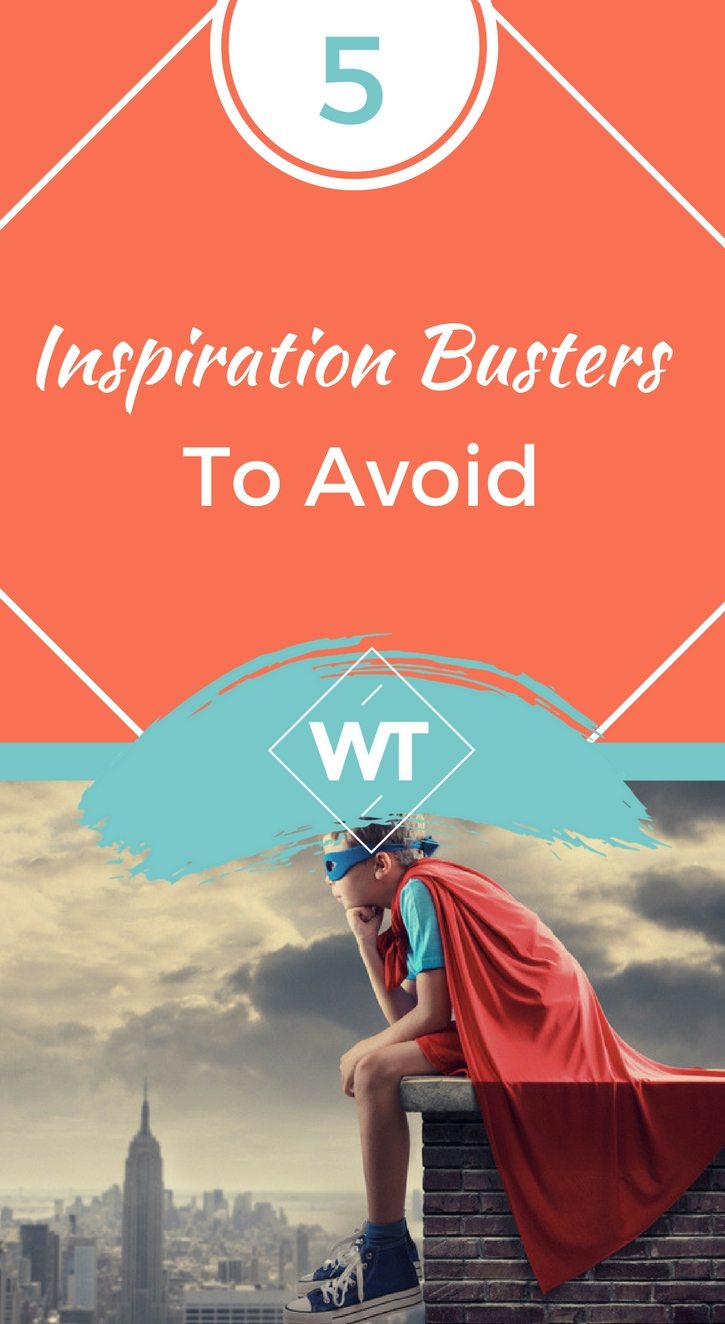 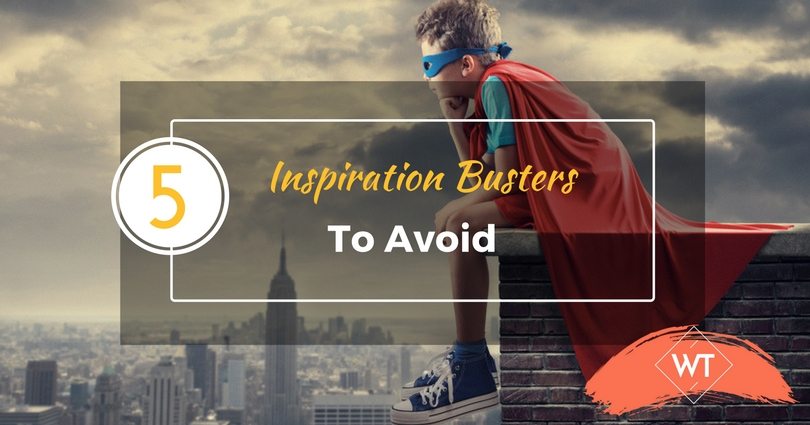 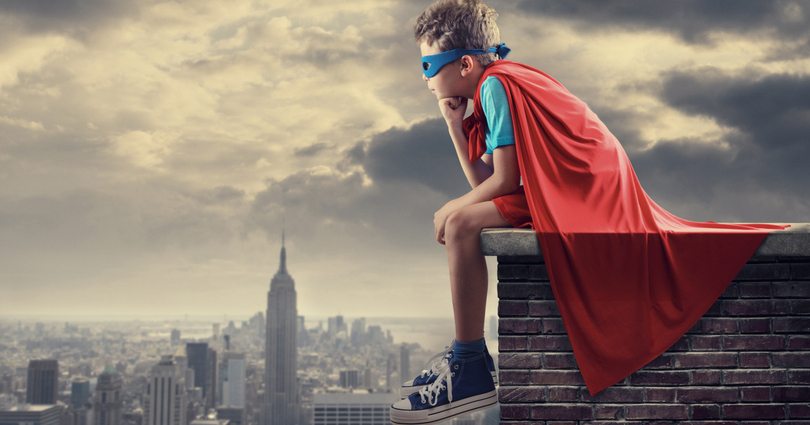 Inspiration is hard enough to come by as it is. The last thing you need is to lose it once you finally get hold of it. But with so many distractions coming at us every day (to say nothing of our ACTUAL responsibilities) it can be hard to grab what we need when we need it. Once you do, hold on tight.

5 Inspiration busters to watch out for

Here are the 5 biggest things to avoid to keep your mojo long and your projects strong.

Number one on the list is your diet. Though you may not realize it, most (as in: the number one reason) of our ills, and even our moods, come down to our diet. If you aren’t eating properly, you can’t function properly. And that goes for inspiration as well. Why?

If your mood is broken so is your mojo. Inspiration is all about attitude. It comes from within. Diet controls your physical system, which in turn controls your emotional state. Junk food crashes that system.

Here is an example. Have you ever been on a deadline, crazed half out of your mind trying to get something done, and fueled up on RedBull? I have. Caffeine is a stimulant, and it helps but the resulting sugar crash and resultant health issues from an energy drink actually do more harm than good to your long-term progress. This is why professional athletes promote the drink, they just don’t drink the drink. Something to think about.

What’s a good alternative? There are a few that work here.

Any of these will switch your mind back into high gear and keep you from stalling out. This helps because inspiration feeds from momentum.

Along those same lines (and you have heard this part before) diet and exercise are two sides of the same coin. What you may not have realized is that this goes deeper than just hitting the gym. For example, did you know that if you change your physiology, you change your emotional state? It’s true. Smile long enough, and you’ll be happier. It doesn’t have to only work the other way around. Happy people smile, and smiling people become happy.

So what can you do if you find your excitement flagging for a project when just a few minutes ago you were excited about it? A couple of things.

This last one (scheduling a walking meeting) is especially important when working in a group setting. It helps to keep the momentum of the entire group going strong. Walking meetings also give everyone—literally—a new perspective and this super-charges their ideas and injects new life into a project.

In addition to the new sights and sounds (which will give all of you new ideas, it also gets the blood pumping. This brings fresh oxygen to the brain which stimulates your neurons and gets things pumping again. Here is a simple test you can perform yourself to prove the concept: Which one is more likely to come up with a new idea? A person having a walking meeting? Or a fish deprived of oxygen? Case closed.

Next up is a biggie. Stephen King says to “Write with the door closed, but edit with the door open.” He means this both metaphorically and literally. People—well-meaning people—can sometimes tear down our inspiration. They don’t share your vision because they aren’t in your head. Eventually, once your book is written and you can open your door again, then you have a chance to invite them in to share your vision. But until then they can just as easily derail you. They don’t even have to be mean. They can be as nice as punch and still wreck things accidentally. Again, it’s not them . . . it just . . . is. And this is the people closest to you. The well-meaning ones. Imagine the negative people!

The only way to handle the negative people is to remove them from your life. There just isn’t another option if you want to succeed.

People who are negative aren’t the type to encourage you (this we know), but what can that mean for your bigger picture? You may not even begin a thing, because of how you perceive someone’s eventual response to you. That’s a recipe for disaster.

In fact, one of the things that college does for students is to expose them to new subjects they might not have even realized they liked or were good at. Apply this to your negative friends. If you never get exposed to new things because you never try anything new, well . . . then you will always stay stuck right where you are. Is that what you want for your life? I would say no (since you are reading this article in the first place). Not to sound harsh, but the negative people need to go.

There really is no need to single out Facebook here. I am talking about time-wasters in general.

Inspiration, once born, feeds on momentum.

If you are wasting your time, you aren’t sustaining your momentum. That kills your inspiration. Some people have success at finding inspiration from Facebook. In my own experience, there is only one way to do this: Facebook groups.

Think of this like you would a walled-garden and on the inside with you were only happy, positive people. And the only job of those positive people was to post something relevant to your project and also inspirational. If this is your use-case, you have a winner on your hands.

This works because of the relevancy (no one is posting anything distracting, therefore it isn’t a time-waster), and also because of the positivity. Remember that section about negative people above? Think instead about the walking-meeting. Everyone together, intellectually stimulated and working towards the same goal. That’s the walled garden I have in mind. Like-minded people, helping you to stay inspired.

The problem with Facebook is that it’s a giant mess of everything the world has to offer. As a cross-section sample, it just doesn’t keep you in the ether. It reflects what is put into it. Garbage in, garbage out.

Same goes for TV. There are some TV programs that can inspire us, and some that can bring us down. Netflix documentaries about happiness, for example, can bring us up, while binge-watching anything at all will keep us from making any progress at all to actually use that inspiration. I would chalk this one up to balance.

6. Telling others: A bonus 6th method

Sometimes all we need is to remember why we were so inspired in the first place. One way is to go back to the beginning. Why were you originally inspired? Tell someone! Bring someone new into the fold. This works for 2 reasons.

For one, if they are new they will need to hear the whole story from the beginning. This may make you fall in love with your idea all over again! And, love, baby . . . is where inspiration lives.

The second reason this works is because the best way to learn is to teach. When you have to indoctrinate someone new, you have to find a way to explain it that gets them as excited as well. This can cause you to see things in new ways. Inspiration comes naturally when we can see things in a new and positive light. Be careful here, though, because the operative word is positive. The caution above about the negative people still applies here. But if you are already established in your new idea you can look at this like the editing phase.

I wish you amazing luck and incredible inspiration.